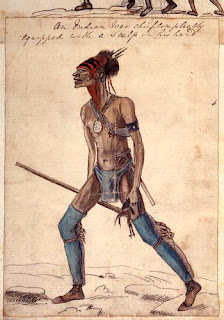 Above:
An Indian War chief completely equipped with a scalp in his hand
by George Townshend, 4th Viscount and 1st Marquess Townshend
pen and ink and watercolour, 1751-1758

Having finished our shirt to cover above, we will now discuss a way to cover below while you are saving your pennies to get a pair of leather breeches made up by a pro (just like in the 18th century!). These aren't the nicest ones ever, but they will do while building the low budget Va backcountry kit! Although the everyday dress of the 18th century Virginia man usually consisted of a pair of breeches, a waistcoat and coat, some men in the backcountry adopted "Indian dress" for hunting and militia service. Some backcountry stores in Virginia sold cloth for leggons, others possibly ready made leggings.

Kentucky River--Saturday, June 10th, 1775. The people at the Camp we lodged at last night gave us some jerked meat. On inspecting our flour, found it does not amount in the whole to more than 15 pounds amongst 5 people. Must make no more bread but save our flour for soup. Proceeded down the River. These people behave very kind to me, I believe there is but two pair of Breeches in the company, one belonging to Mr. Tilling and the other to myself. The rest wear breechclouts, leggings and hunting shirts, which have never been washed only by the rain since they were made. 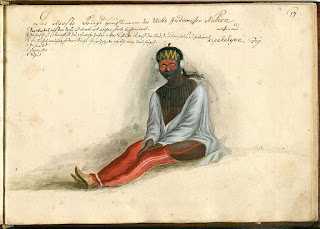 From a 1775 Broadside circulated in Philly:

"The Virginian back Woods Men have a very good Reason for their hunting shirts, for as they wear no Breeches, Decency requires that their upper Dress should be of this Form "

First we will consider the breechclout, which was basically nothing more than a rectangle of wool cloth, sometimes lined with linen or cotton and decorated with ribbon and other ornaments for the Indian trade.

For our purposes, I suggest finding a decent mid-weight blue woolen cloth that will hold a raw edge and has a decent firm finish to it's surface. Blue and red cloths predominated the Indian trade, and numerous accounts for Virginians mention blue leggings, so without information to the contrary it is a safe choice.

Augusta, June 20, 1768. RUN away from the subscriber, near Buchanan's ferry, the 5th instant, an English convict servant man, EDWARD HICLY, about 30 years of age, about 5 feet 6 inches high, stoops, and has dark brown curled hair, of a fair complexion, and pitted with the small pox; had on a light coloured jacket, double breasted, but no buttons on it, with slash sleeves, leather breeches, white yarn stockings, blue leggings, old shoes, and an old felt hat. Whoever takes up the said servant, and secures him so that his master may have him again, shall have forty shillings if taken in this county, if in another, four pounds reward, by me
JAMES LADERDALE.

A pair of green woolen leggings were featured in the Clash of Empires exhibtion. Catalog notes (page 15) mention that they are 60.5 x 22 cm (approx 23.8 inch x 8.6 inches)

Step 1. Rip or cut a 1 inch strip that runs the width of the fabric. This, once tied around the waist, will serve as a belt or girdle to suspend the clout.

Step 2. Rip or cut another rectangle of cloth 3/8ths of a yard ( about 13.5 inches) x the fabric width for the clout.

Step 4. Cut both of the 1 inch strips from step #3 in half. This will function as a garter for the leggings when tied around the finished product, and can be a "suspender" belt from the outside edge to the waist belt.

Step 5. With the remainder of the wool, cut two rectangles about 27 inches square.

Step 6. Fold the 27 inch squares in half, and with some assistance pin them to your legs with the fold on the instep and the flaps to the outside (wearing stockings and or breeches at this time is a good idea if you will wear them with the leggings). A snug but not leg numbing fit is the way to go for maximum comfort. Blue toes are not a good thing.

Step 7. Use a running or Back stitch for the exterior seam along the pinned edge, If desired, you can leave a few inches open at the bottom of the leggings, and sew two or three hooks and eyes to hold them closed as seen on the Caldwell leggings. For further info on that pair, including nice detailed pics, check out "Re-Creating Sir John Caldwell's Leggings." by Ted Franklin Belue, S/O, page 38. Muzzleloader Magazine 1998 (thanks to Fred for that info!):


Dave B recently linked this interesting info from 96 in South Carolina which seems to confirm the use of hooks and eyes on leggings may have been pretty widespread (thanks Dave!):

The trenches exposed in this area were found to enclose an area 85 by 150 feet. These trenches were found to end at three places with each of these places containing "footing holes" (post holes) for three structures. The south structure had seven footing holes that formed a rectangle 15 by 30 feet, the west structure was represented by six footings forming a square 19 by 21 feet, and the north structure had four footing holes and measured 21 by 32 feet. When matched with a 1821 map that portrayed Williamson's Fort of 1775, these three structures matched those structures identified as John Savage's barns shown on the map. A fourth building was also shown on the map, but South didn't investigate this; he simply extrapolated its location. A bastion was found just west of the south barn location. Most of the fort had been intruded upon by Holmes Fort. Very little excavation was done in the ditches (which were found to be one foot wide and two feet deep). Near the center of the area of Williamson's Fort, a rectangular pit was found measuring 3.8 by 8 feet, and 2 feet deep; thought to be a possible burial, there was no evidence of a body. A few feet to the north of the south barn, a larger shallow feature containing a two by six feet burial pit was found. This pit contained human remains, a large pocket knife (at the hip), large brass coat buttons (near the center of the body), pewter buttons (near the rib cage), and brass wire eyes (near the ankles) (South 1972:30). It is possible that these are the remains of James Birmingham who was the sole fatality in the brief conflict at the fort between Loyalists and Patriots in 1775.

Step 8 trim some of the excess material outside the seam.

Step 9. Apply the suspender strips to the exterior of the legging by whip or back stitching.

Step 10. Extra scraps can be used as a loop that passes under the foot (inside the moccasin or shoe) if desired, (see the Caldwell leggings).

Another leggings tutorial
Posted by Jim at 10:27 AM